We’ve reached the half-way point in our adventure, and have been on more trains, ferries, and buses than I can count.  But still there are days when things seem a little off.

Yesterday, we left Lipari, in the Aeolian Islands, and made our way to Cefalu, on the northern coast of Sicily.

The ferry ride was fine.  We are now used to the fact that there are no lines in Italy – people just get in one big mob and push their way up to the entrance of the bus, train, or ferry. It’s a little disconcerting at first  – but you get used to it.

The ferry port on the mainland in Milazzo is too far from the train station to walk.  I don’t really like taking taxis because they often overcharge tourists (we were warned about that in Catania and Rome), and there is a convenient  public bus, so we hauled our bags over to the bus stop.  Only it wasn’t the bus stop.  It was a bus stop – because it had the words BUS on the stop, but the stop for the public bus was about 200 yards further down the street.  Rookie mistake. Grrr.  It didn’t help that there was some sort of military ceremony (graduation) going on between the two stops.

We wavered about taking a taxi when we couldn’t figure out the bus – but the person organizing the taxis wandered off.  Then a bus went by and we could see where it stopped – so feeling like two very incompetent tourists – we headed back to the bus stop to wait.

All that considered, we made it to the train station in time for the train we would have caught if we had taken a taxi.  But we couldn’t buy tickets.  It was silly, but we couldn’t figure out how to type in our PIN code.  The keypad only had numbers, not letters, and we have memorized our code using letters.  Grrr.   The machine took cash, but only change (not bills), and there was no ticket booth with a live person.

As they announced the train’s arrival we decided to see if we could buy a ticket on the train.  Of course, the train was arriving on a middle platform, and we (and our bags) had to run to try to catch it.  The helpful? men on the platform told us to go over the tracks.  I guess the signs saying not to cross the tracks (use the underground passage instead) are just advisory in Sicily.  Or no one cares.  Anyway, we did just that, found the conductor, who told us not to worry about the ticket and just get on and not delay the train.  Grrr.  You think you’ve got things figured out, and then you end up looking foolish.

But Cefalu was worth all the effort.  This little resort town is nestled at the bottom of a huge rock, or “La Rocca” – a 270 meter high limestone crag that rises straight up. 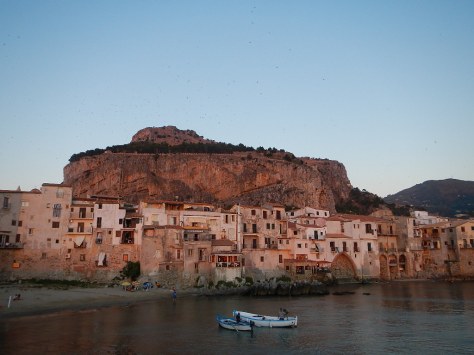 The top of “La Rocca” was inhabited off and on over the centuries.  There are the remains of a megalithic (big blocks) “Temple of Diana” that date from Greek times. 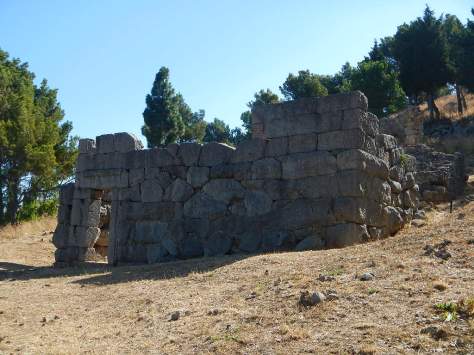 The entire rock is encircled by a thick wall (except where it is sheer), and during medieval ties there were buildings to store grain, water cisterns, a small castle (fortified with a second wall) and a whole lot of lookout towers.

From the lookout points the city’s guards could see invaders coming from miles away, and get the townfolk up to “La Rocca” for safely.

In a strange way, Cefalu reminded me a little of Dubrovnik – with the medieval part of town topped with bright red roof tiles.  Only the wall wasn’t around the city, it was behind the city.

Oh – and I should probably mention that Cefalu has one of the nicest beaches I’ve ever seen in this part of Europe.  Long, sandy, with calm water.  It’s already packed in late June, so I wonder what it’s like in August.

We’re heading to Taormina tomorrow, by train and then bus (I think).  I’ve got my fingers crossed that it’ll go smoothly.  From there we’ll decide whether or not to go back to Mount Etna.  The eruption a few weeks ago turned out to be a very minor one – over almost before it began – so we didn’t head over to see it.  Since then there have been a few minor “burps” but nothing more than when we were there a month ago.