Of all the churches we visited in Rome, this one stood out as interesting, quirky, and just plain unusual, and quickly became my favorite.  The first draw was the historic preservation angle.  Santa Maria degli Angeli doesn’t look like a church from the outside – and that’s by design.  Michelangelo’s design!  The church was what we today call an “adaptive reuse” of Roman baths.  This means, instead of tearing down the ruins, they were redeveloped into a church.  There are Roman baths all over the Roman Empire – but as baths go – these were huge – the largest in the empire.  They sprawled over 30 acres (five times the area covered by the Colosseum), and could hold up to 3,000 people at once!  The baths were built between 298 A.D. to 306 A.D. (source – information boards at the church) and were in use until 537 A.D until Rome was attacked by barbarians and the aqueducts fell into disuse.  (source: Rick Steves.) 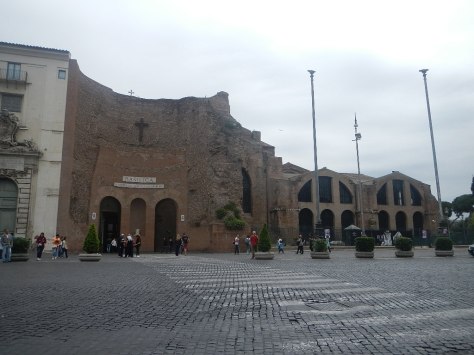 The reason the church doesn’t look like a church from the outside is because the façade is part of the caldarium – or steam room of the ancient baths. This room faced south-east, and extracted the most heat possible from sunlight (although it was also heated by an extensive and sophisticated heating system.) 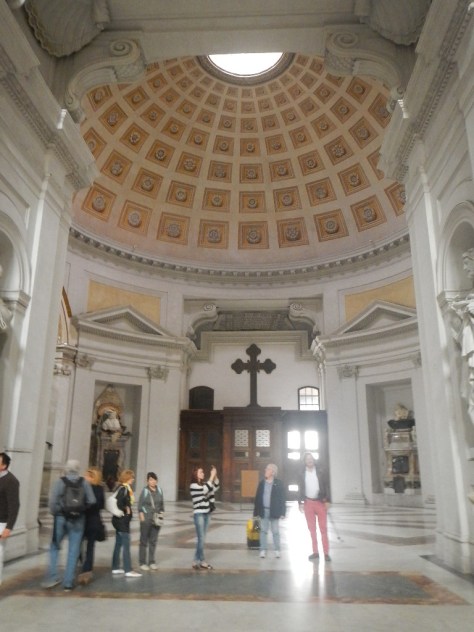 The round-domed room (now the church entryway) was once the tepidarium – or cooling off room of the baths where you could get a rub down and be scraped with a stick (they didn’t use soap.)  The domed ceiling is similar to the Pantheon – although much smaller. 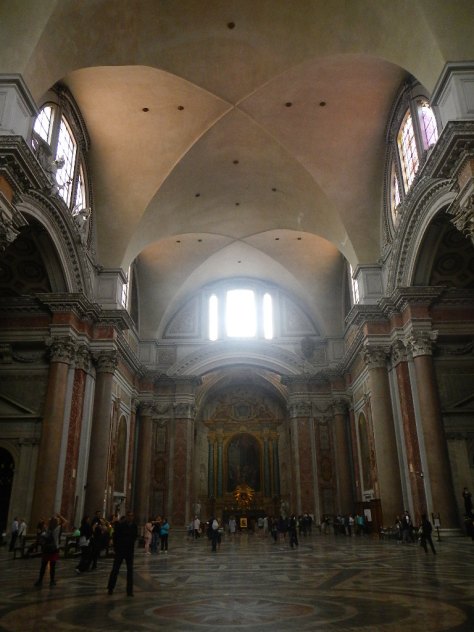 The former central hall is now the main part (nave) of the church.  It has crisscrossed arches – an architectural feat that wouldn’t be matched for thousands of years (like the Pantheon’s dome).  It’s hard to get a feel for the size of the hall from the photos – but it is as large as a football field.

The baths lay in ruins on the outside of what is now central Rome – or the area that was in use in the middle-ages.  Since they were far from where the new construction was going on, they were largely left alone and were therefore in pretty good shape (other areas like the Colosseum were used as rock quarries.)

There were many plans to restore the ruins, but they were never a high priority until Pope Pius IV gave the orders, and the commission was given to Michelangelo.  It was his last architectural work – completed when he was 86 (1563-1564).  (It has been renovated and reoriented by another architect since that time.)

One of the most intriguing elements of the church is the presence of a central meridian.  The meridian was added to the church in 1702 by (astronomer, mathematician, archaeologist, historian and philosopher) Franchesco Bianchini  at the request of Pope Clemente XI.  The pope wanted a meridian in Rome for three reasons – to test the accuracy of the calendar, to create a tool to predict Easter, and to to make sure Rome had a meridian at least as accurate as that which had recently been built in Bologna.  Source.

The meridian is an intriguing piece of science.  A small slit was cut into the exterior of the church that allows in a spot of sunlight around noon (actual noon – which for us was around 1:06). 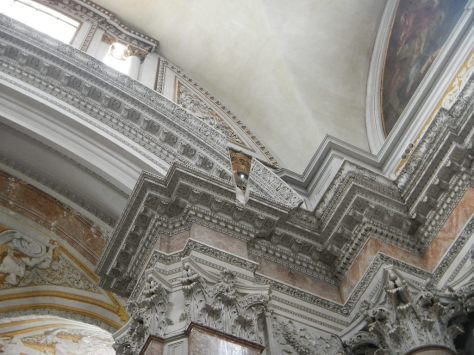 The sunlight shines onto the floor – illuminating a “date”.  In this case – it illuminated the crab – or Cancer Zodiac sign.  We were there on June 4, 2014.

All twelve zodiac signs are arranged around the meridian, and other special dates such as Easter are also marked. 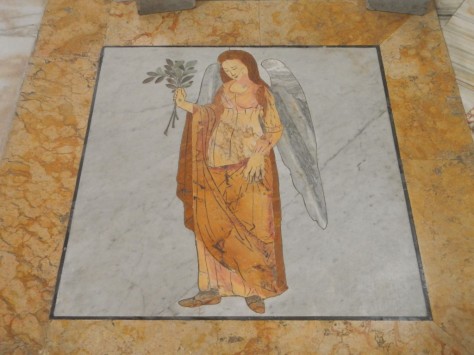 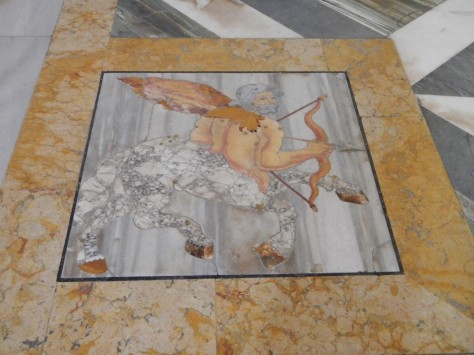 Watching the sun come in through the hole (it was cloudy so the effect was even more dramatic as it unveiled itself right at the correct moment) was like something out of the Lord of the Rings.

Historic preservation, architecture, science and faith.  This church was one of the most fascinating I’ve ever visited.